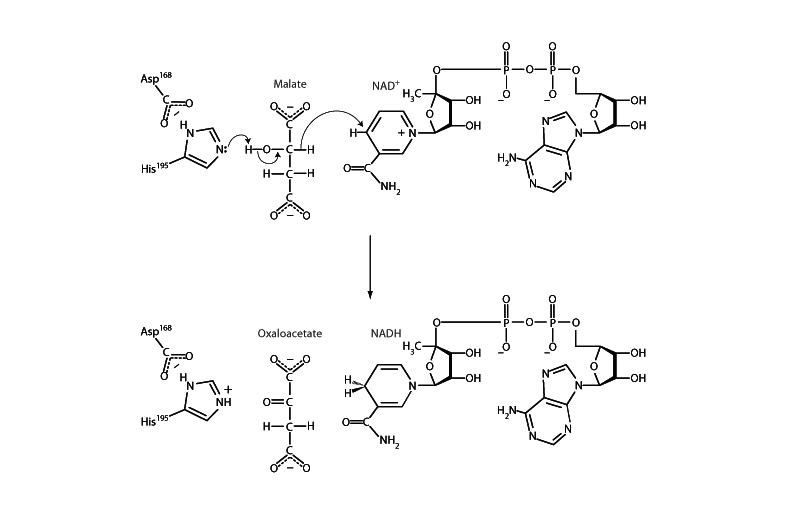 Malate dehydrogenase
Enzymes catalyze reactions by doing one or more of the following: bringing reacting substances into close proximity, binding substrates in precise orientations, polarizing substrates, destabilizing reagents or stabilizing transition states. Enzymes often bring reactants together in the presence of catalytic functional groups within the active site. Substrates are usually bound to enzymes exclusively by noncovalent interactions but sometimes other forms of binding may be involved. For example, the pancreatic enzyme carboxypeptidase A binds its substrate in the active site by intermolecular forces, a coordinate covalent bond, and a salt bridge.

After you've seen enough enzymatic mechanisms, you start to recognize patterns. A histidine residue in the active site, for example, will often be seen playing the role of an acid-base catalyst. With a pKa close to 6.0, the state of ionization of histidine is sensitive to small changes in pH in the physiological range. Additionally, the pKa of histidine may be altered through proximity to other groups within its microenvironment.

As a base catalyst, histidine will often be seen abstracting a proton to free up a pair of electrons to make a nucleophile more powerful. In this way, base catalysis will often accompany activation of the hydroxyl group of a serine, or threonine, such as in concert with glycosylation or phosphorylation. Base catalysis is necessary for activation of a lysine amine group for Schiff base formation in this way. Additionally, base catalysis by histidine will also often be seen liberating a pair of electrons so that they get moving in an elimination mechanism. Abstraction of a proton from a hydroxyl group by histidine in malate dehydrogenase, for example, liberates a pair of electrons transforming the hydroxyl group into a carbonyl group, eliminating a hydrode from the backbone carbon, which then passes NAD+.