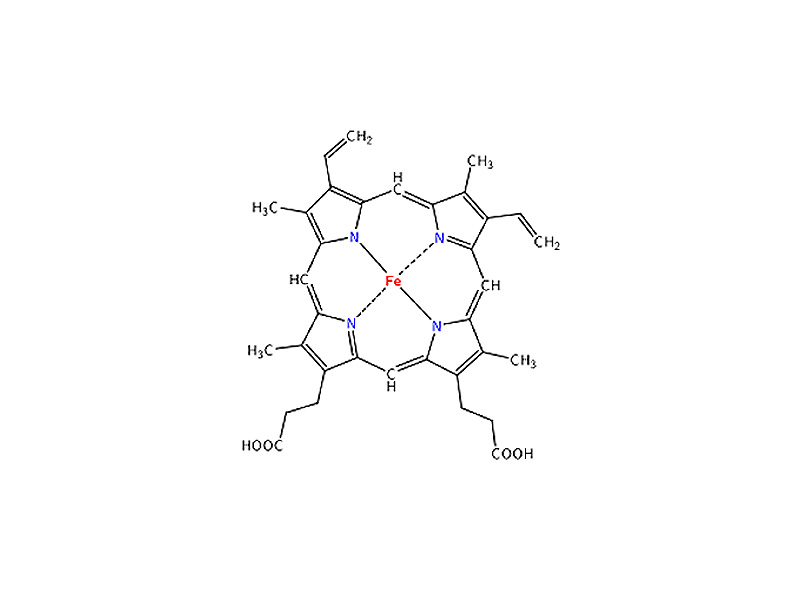 Heme
Many biologically important substances possess organic functional groups that form coordinate covalent bonds with transition metal ions. One prominent example is the heme group within hemoglobin, myoglobin and cytochromes. Heme is coordination complex consisting of an iron ion coordinated to a porphyrin acting as a tetradentate ligand, and to one or two axial ligands which depend on the particular protein. In myoglobin and hemoglobin, the axial ligands are a globin histidine residue and superoxide radical anion (the state of O2 when bound). The iron and porphyrin together constitute heme.

In the oxygen binding site of hemoglobin and myoglobin, four of six of iron's coordination positions are occupied by bonds to the porphyrin ring, a fifth is involved in a bond to a histidine side chain of the protein. The sixth is available for the formation of a coordinate covalent bond with oxygen. Heme is also present in the electron carrier cyctochrome c, as well as in cytochrome c oxidase, which has two heme groups as well as two coordinated copper ions.

Carbonic anhydrase and carboxypeptidase A contain coordinated zinc, where it performs a catalytic function within the active site. In the enzyme, ATCase, zinc plays a structural roll. Zinc also plays a structural role within zinc finger domains. Zinc finger domain is an important type of DNA binding domain you will see in transcription factors regulating gene expression (there are several major types of DNA binding domains). Further examples of coordination complexes in biology include vitamin B-12, cobalamin, which is a large complex of cobalt.

From my perspective, AAMC seems to be well aware that cordination chemistry is a blind spot for many premedical students going into the MCAT. They'll put something like the corrin ring system of cobalamin into a passage just to upset you. Take your time and let it clear. This kind of thing is never as hard as it looks at first. Give your brain a moment to accommodate to any big structure in a passage. If it is a coordination complex in a passage, just having had a basic orientation to coordination chemistry will go a long way.